Neck Thickness: Everyone Has a Different Idea What It Means

Neck Thickness: Everyone Has a Different Idea What It Means

We have all heard the descriptions used for guitar neck thickness, and to be honest none of these descriptions actually mean much of anything.

Then, throw in the other variables such as extra 'shoulder,' little to no shoulder, and other profile attributes.
The profile could make for a fuller feeling neck, or it could make the neck feel like it's missing something.
Neck profiles however do NOT contribute to neck thickness.

So, what is the easiest way to quantify neck thickness? I use a digital micrometer.

I measure neck thickness at fret 1 & at fret 11, just as demonstrated in the BOTB.
The BOTB 'Burst Neck Thickness Summary' is a pretty good example (IMO) of how to reference neck thickness for Gibson style guitars.
This however only holds true if one has the means to accurately take neck thickness measurements.
If you have a reliable micrometer, and you actually know how to properly use it, then you are good to go.

I do understand that guitarist in general do seem to gravitate toward the lazy side of the general spectrum so, foregoing the above is certainly much easier to accomplish. 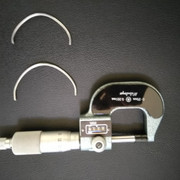