by Max The Dog
Can anyone help me please? I have been offered an Orville LP Junior but the seller doesn't know which year it was made. The serial # is 409032, also what sort of price would this guitar in average condition be worth? Any help would be very much appreciated.
by LPjunior
September 1994, made at the Fujigen factory. I've one of the earlier made Terada ObG DC's and love it. The plain Orville's have a thicker poly finish, cheaper pups and a solid finish rather than translucent compared to the earlier ObG's but should still be made to the high Fujigen quality.

Hard to say on price as I got mine from Japan for a song but I'd guess maybe £300-£400 in the UK for one with no major issues or fret wear
by Max The Dog
Thanks LPjunior very helpful, much obliged.

by Freebird
What kind of neck shape on fujigen juniors? Fat?
by LPjunior
Hard to say for sure as I'd seen lots of conflicting statements about the fuji neck sizes. The Terada's I've had would all be classed on the slim side I'd say whereas all the fuji Orvilles/MIJ Epi's have been slightly fatter but apart from my 57B, which is supposed to have a fat neck, none have been what I'd class as fat.

There' a thread on the Mylespaul forum other single cut section with a list of neck sizes. Considering they're CNC cut you'd have thought the individual factories would all be pretty standard as other than a little sanding it was all computurised cutting by then.
by Freebird
Great thanks. I've got one coming to me. Fujigen 1997. I'll post neck measurements
by LPjunior
Nice one, be sure to post a load of pics. I've always wanted a Fuji DC junior to compare to my Terada ObG DC. From what I've seen on the net it's always the single cut juniors that have the thicker necks rather than the DC ones which seems to be in general described as slim. 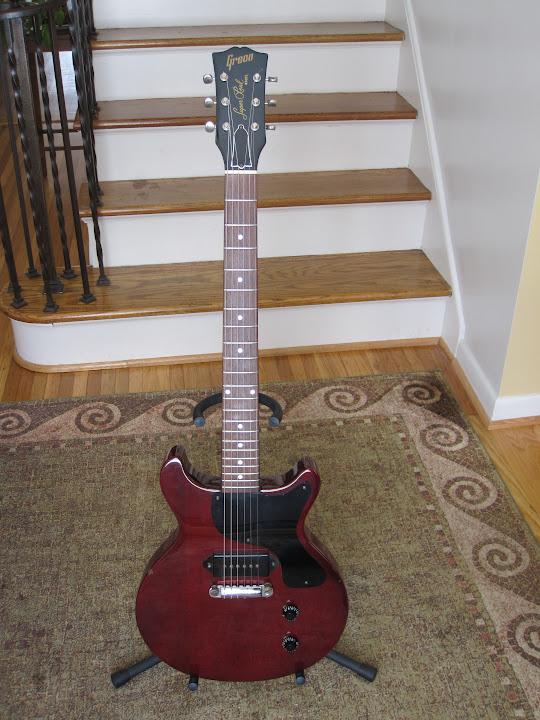