Need Your Input on this ObG 335

Discussion area for Orville and Orville by Gibson guitars

I think the circuit board pickups are Bill Lawrence HB-R/HB-L pickups that Gibson were using at the time. They are only on the OBG's and not the Orvilles.


I can't really judge guitars for a buyer, there are just too many variables.
Top

japanstrat wrote:All of the Semi Acoustic and Acoustic Orville by Gibsons and Orvilles were made only by the Terada guitar factory.
Terada have also made most of the Japanese Gretsch Semi Acoustics from the late 80s and most Gretsch players think they are very good guitars.

Terada specialize in making Semi Acoustic and Acoustic guitars and are very highly regarded by most people.

Anyone else with input on this 335? Much appreciated.

Looks pretty nice. I'd get it if I needed another one. You wouldn't be unhappy with it, that's for sure.

On the other forum you expressed some confusion about the meaning of some the terms being bandied about here, like OBG "Reissue" and "long tenon", so I thought I'd post the same info here in case anyone else was wondering about that as well.....

Here's a very 'quick and dirty' answer to some of your questions:

This a look under the under the neck pickup of my Sunburst OBG ES-335. 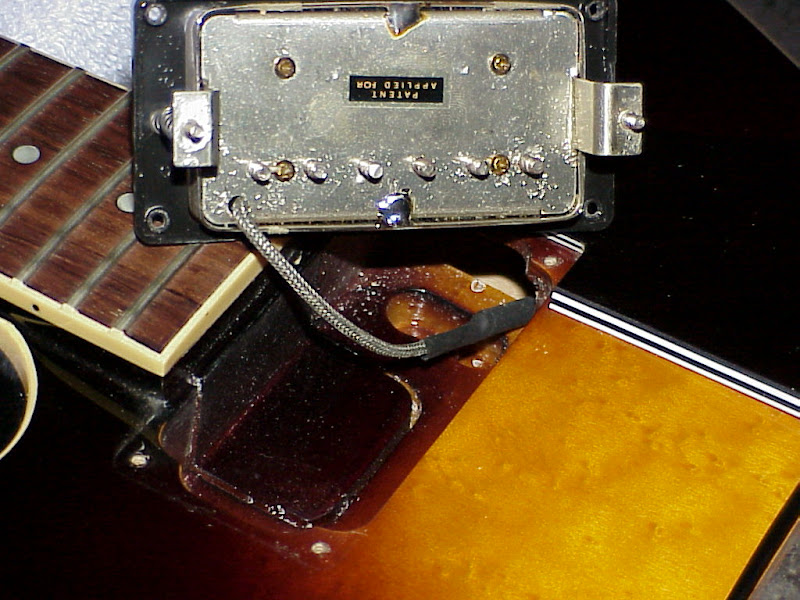 The tenon of the neck extends all the way into that pickup cavity. 99% of all OBG LPs, SGs and ES's have the long tenon neck that looks the same. 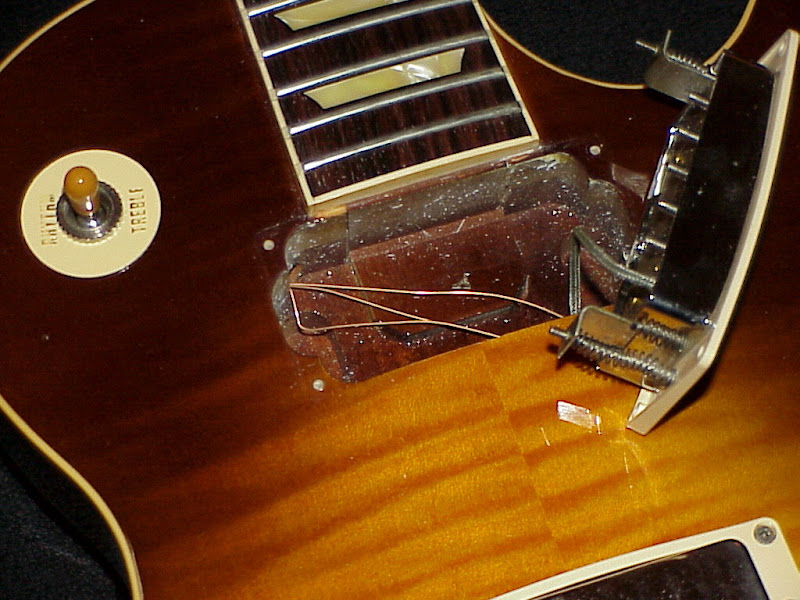 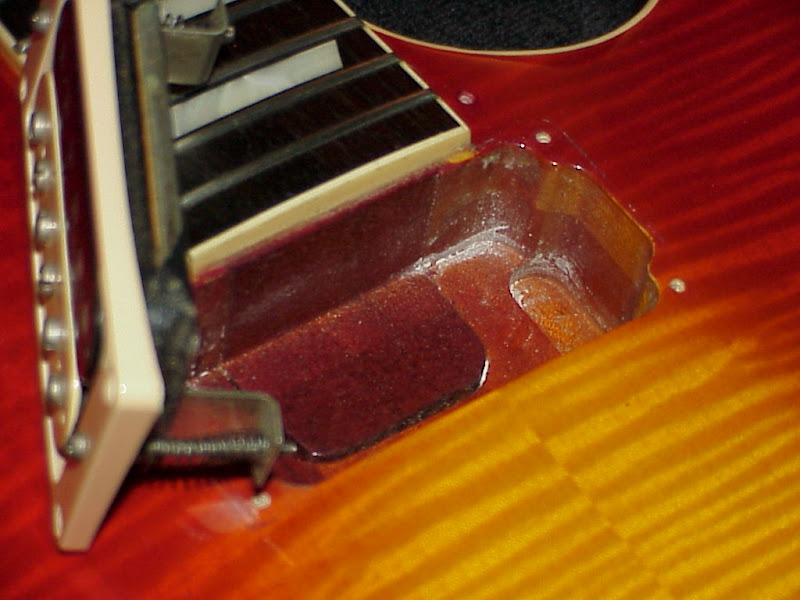 OBGs were only made from '88 to '95 and the "reissues" were mostly made in '93 and '94--there are a few examples 92's and 95's with the "reissue" details which mainly consist of more yellowed (like 'aged') body binding, binding on the edges of the frets (which you can see in the pic), a slightly chunkier neck, the original truss rod covers were blank rather than having "Standard" on them and in the case of ES's, deluxe (rather than standard) tuners were fitted. 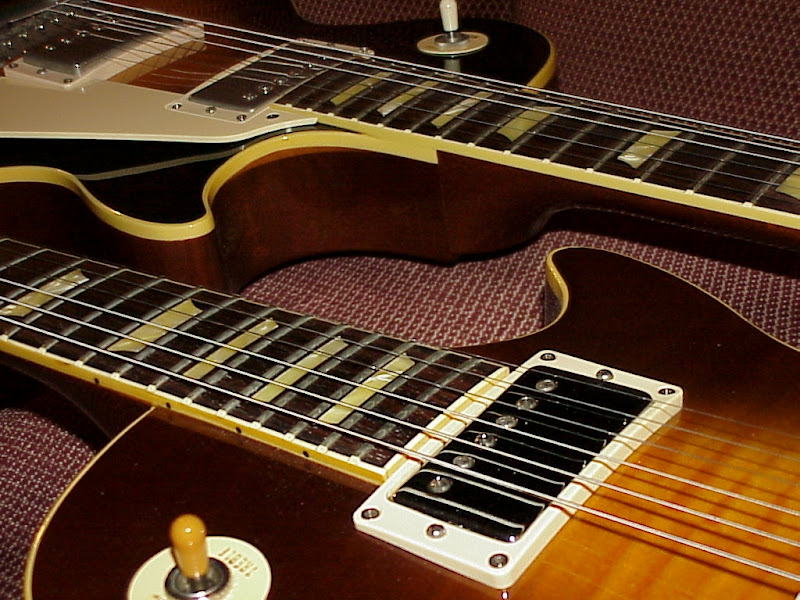 The specs of the OBG "reissues" are generally more vintage correct to the actual original Gibsons than the "Standard" OBGs.

A few of my OBGs have that same Gibson pickup as the one you're looking at. It's gonna take awhile, but I've begun putting up pics of some of my OBGs here if you want to see more:

In 1988 the OBG's were launched and Yamano subcontracted Terada to make all of the solid bodies and the Semi Acoustics which isn't very surprising seeing that Terada were already making the Epiphones for Yamano/Gibson. All of the OBG's up until late 1992 have a Terada G serial number and the K Orvilles were not serialized by Terada.

It's not until late 1992 that Fujigen gets involved and when they do, they take over about 90% of the solid body making including all of the Orville solid bodies (no more Terada K Orvilles) and Fujigen uses a no letter serial number.
At this time Fujigen was mostly a solid body maker and Fujigen discontinued all of it's Acoustic making around 1981.

Terada still made some OBG solid bodies from late 1992-1995 though, and Terada keeps on making all the OBG Semi Acoustics and Acoustics.
In 1995 the OBG's finish and Terada changes to a J letter serial and Fujigen just keep using a no letter serial. From 1995-1998, Fujigen made about 98% of the solid body Orvilles with only an occasional Terada made J serial solid body and Terada made all of the Orville J serial Semi Acoustics and it continues like this for the Epiphone Elite series.

ah thank you japanstrat, so all the 335 ObG's will have the G terada ser number then?
http://www.japanguitars.co.uk
Top

From Innadaze's description between a reissue ObG versus a standard ObG, I learned that the two 335s I posted are not 100% original. Hopefully I got this correct. Please correct me if I am wrong.

If I remember well, some ObG accoustic have an A serial ( but I saw only a few, maybe a special run for a shop or something like that? I saw a Dove model with that kind of serial a few years ago), some also have the classic fujigen serial with no letter ( I remember a j-200), but it's not the majority.
nankurunai sa!
Top

Yes, the Acoustic serial numbers on labels vary a bit. There is G and AG and maybe no letter. I think it depends on who did the label typing. The Acoustics were probably all made by Terada because Terada make Acoustics so unless there was a reason for Yamano to change factories for some of the Acoustics it looks like Terada made them. Fujigen stopped making Acoustics around 1981.

japanstrat wrote:Yes, the Acoustic serial numbers on labels vary a bit. There is G and AG and maybe no letter. .

japanstrat wrote:The Acoustics were probably all made by Terada because Terada make Acoustics so unless there was a reason for Yamano to change factories for some of the Acoustics it looks like Terada made them. Fujigen stopped making Acoustics around 1981.

HA, possible, at one time Terada had 3 plants so it can vary from one plant to another.
nankurunai sa!
Top
Post Reply
25 posts