by Stratgo
I'm waiting on delivery but have some concerns about the originality of the body. There is no neck pocket stamp and fresh routing and sanding that could of removed any markings in the neck pocket. The wood doesn't really look like Sen Ash to me and a lot like Basswood.The seller stated the pickups and guard are modified but he probably didn't realise the pickups are Greco SE1 found on some high end Grecos. I only paid $400 usd plus shipping from Japan but it would be a let down if the body is not original. Anyone have any ideas

by J.E.M.
don't think it's Sen or Basswood, look like Alder to me.
by wulfman
That is pretty much from the end of the Greco strat production. With a brass nut and the pickup configuration and wiring it could just be and odd-ball end of the line guitar.
I remember that one on Yahoo Japan. It looks great in the pictures.
by guitar hiro
that is a beast

congrats
by Stratgo
IDE be real happy if it's alder. Just thought the sunburst looked to good for a Greco but if it was made a few months later it would be a Fender. The pickups are hot about 9 something dc and I like hot for my giggling guitars. Certainly looks like a Friday arvo job.
Cheers
by brokentoes
It looks brand new !!! Where was it a time capsule ?? Nice score.
by Stratgo
I've been doing a lot of research to find out more about the pickups(SE1t) and have pretty much come up empty handed. They are used on the SE 800j ( Jeff Beck Model) that uses 3 toggle switches instead of a 5 way switch. The pickups have 4 conducters and I presume the "T" stands for tapped. On my guitar the tone and volume pots are push/pull and look the same as on the SE 800J. I believe it is possible that my guitar came this way from the factory. I did read someone else could not find any Greco SE later than April 1982 as mine is. Maybe they just threw some parts together to get the guitar out the door when winding down production.I'll abviously do some serious testing once I get the guitar but if anyone has something to add, please chime in. Sorry for the long post
by wulfman
You may be right about some creative models at that time. This strat I used to own was also a D82 model. It also had a brass nut. 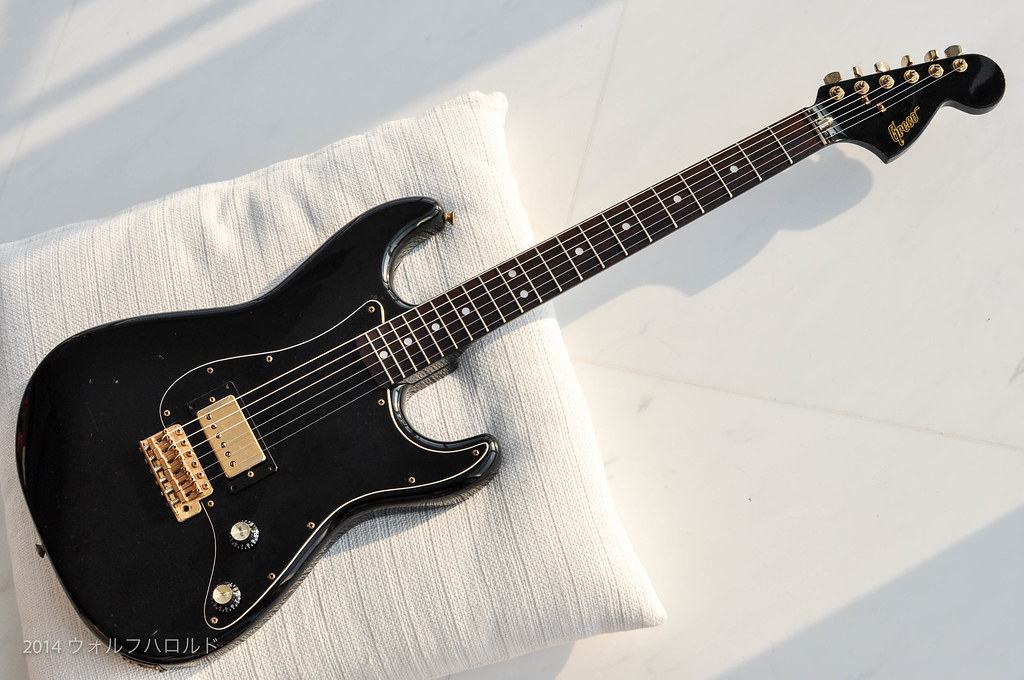 by wulfman
It looks like yours is not the only example of this model.
An auction just ended for what looks to be the same guitar model with a D82 s/n. It is a bit of a rescue job and looks well played but has the same pickups, brass saddles and two string trees. It also has the same colour body so odds are better that your guitar is all original IMO. 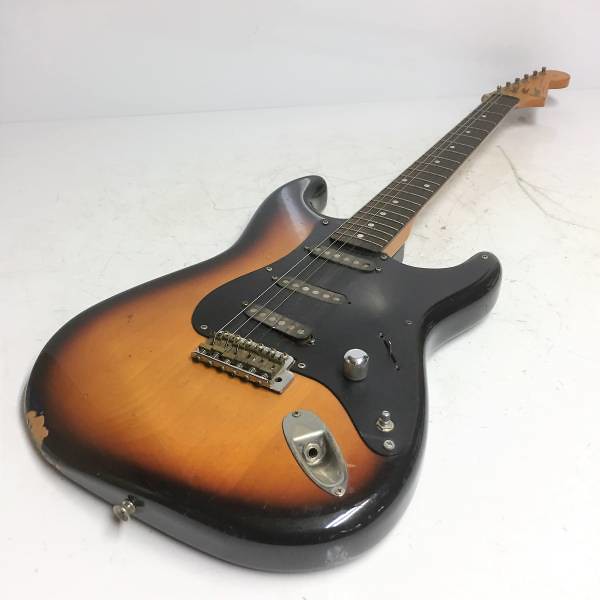 by Stratgo
Thanks for your posts. I just got the guitar today and plugged it into an amp. It sounds great. The pickups are great and when you pull the knobs up you get the extra tap that puts it into almost a humbucker kind of sound. I prefer it without the extra tap,still pretty fat and sounds great on all pickups. The neck is straight with the slightest bit of relief that I might tweek. The action is still a bit high but the bridge pieces are against the bridge plate and might need replacing for shallower ones otherwise I need to shim the neck. By the looks of the above post this guitar is probably all original and has hardly ever been played. No scratches on the pickguard ect. Looks like three piece alder. I've just got to fix where the paint has peeled. I'm stoked, my wife not so much as this is my third Greco.
Cheers
by Stratgo
I've shimed the neck, tweeked the truss rod and got the action where I want. Trouble is I need to take the pickguard off now to see how it's wired cause I can't quite work out what's going on. When you pull the tone knob up it puts the bridge and middle pickup into action even when the 5 way is on the bridge pickup??giving it a humbucker type sound.It seems this thing has a very large amount of different sounds including a nice Mark Knofler out of phase sound between neck and middle, and I don't usually like out of phase sound. It's a really fat, usable sound. These pickups are great. Anyone had any experience with these with the four conducters? I'll post back when I've somehow got my head around the wiring. I don't think Greco just threw this together in a hurry. Some thought went into it and I'm loving it.
by Stratgo
Polished the nut slots and applied some oil and now it stays in tune when using the whammy. Played first bracket at a gig and it sounded great. I might need to lift the bass side on pickups for more lower string sound. I've ordered a steel trem block to replace the alloy one but other than that it's staying stock. The pickups are great and a lot like my Dimarzio FS1's in my '78 Strat I gig with. I'll take a peek at the wiring when I put the trem block on. Cheers
All times are UTC-06:00
Page 1 of 1
Powered by phpBB® Forum Software © phpBB Limited
https://www.phpbb.com/